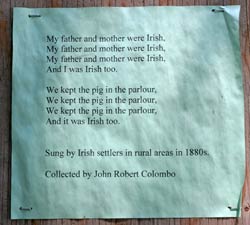 Part of the history of the Tollkeeper’s Cottage is the history of the tollkeepers and their families. Despite the fact that the Township of York records were all destroyed by fire in 1881, searches of census tracts and other documents have yielded the names of some tollkeepers. Interestingly, they are all, save one, of Irish origin:
- Francis McCegue (father and son) in 1851;
- John Bullmin (of English origin); in 1861
- Moses Hanna;
- Thomas Brown;
- Robert Billings;
- Chester G. Kane.

The search for information and pictures of these men and their families is on-going. Any information you can provide would be most welcome. Much has been learned about the John Bullmin family from his descendents, and CHP has bits of information about Moses Hanna (who had two periods of service at the tollkeeper's cottage), but almost nothing about the others.

We have tried to have all the furnishings in the Cottage 1861 or earlier. That is because we know the most about the Bullmin (Bulman) family who were the Tollkeepers  and a family of 9 in the 1861 census.   We picture the Bulmans using these things.

Due to the research they'd already conducted, CHP was ready to act when the date for redevelopment became known. The building was acquired from the developers by CHP for $1 on condition that CHP remove the cottage within 30 days and clear the site for redevelopment.

CHP therefore had to find a place to "park" the building while making arrangements with the City of Toronto for a permanent home. The Toronto Transit Commission kindly allowed the Cottage to rest in its former Wychwood Yard.

Getting it to that yard and fulfilling the arrangements with the developer took 2,626 hours of dirty work by volunteer labourers and $26,000 in unavoidable costs